IT’S OFFICIAL!! After three days of “roughing it,” we are the WORST camping family ever!! We have been camping with real pros before and survived so we thought we would give it another try by camping in a cottage at Newport Dunes. I should have known that this camping trip would not be like most people’s when my family immediately set up the foldable lounge chair in the living room instead of outside. Day 1 we grilled outside but when the coals went out we opted to cook s’mores on the stove. Yeah…we found an alternative…so anyway, I knew we were in trouble when we awakened on Day 2 and my spouse asked me where the iron was. After actually looking in the closet a hot minute, I remembered that “camping” is probably not synonymous with “ironing.” 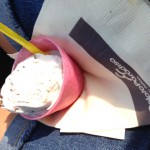 Day 2 of “camping” took an even uglier turn when after swimming in the pool (yes, I said pool) a decision was made to venture out to lunch off the camping site. I knew this was a VERY BAD idea. Somehow we ended up having lunch at Nick’s in Laguna Beach (we LOVE Nick’s whenever we are near by). While we eagerly munched away, I knew I had lost my “camping” crew forever! Next a trip for gelato at Gelato Paradiso. Who the heck is “camping” and eating gelato?! Needless to say, I kept shaking my head throughout lunch asking my family if they realized what “camping” means. Oh and please do not let me forget to mention that the “camping” also seemed to lead us on an expedition that yielded a catch of Seven jeans and Adidas tennis shoes (wink, wink…we made ourselves feel better by rationalizing that it was back-to-school shopping). After eating and shopping, my lovely crew decided that they would pick up Panda Express as their evening snack. See how much this sounds like camping? And so ended our day.

Now just to be fair, I will admit that I a horrible time sleeping. I heard things scratching in the wall all night and only prayed that it was my psycho imagination, I also became itchy by night number two. Seems that I am no serious camping maven either…but I really was trying! I think you get the picture by now. Making sure there is wifi available, refusing to swim in the Bay, along with countless other shenanigans can only lead to one conclusion…look for us on a tropical beach vacay next year!

But seriously…(well, I am quite serious, but on another note)….I thought about how this applies when people are looking to purchase a home.

1. Focus on the location that truly appeals to you and of course is within your budget.

2. Keep an open mind and possibly find a way to blend a new concept with an old concept.

3. Remain flexible. Even though things may not go exactly like you plan in your head, they may just make you smile in the end.

Who Said Camping Wouldn’t Be Good For You?